To review, DMD is caused by a frameshifting mutation of the DMD gene that results in the almost complete loss of dystrophin expression. Dystrophin anchors the sarcolemma with the cytoskeleton and extracellular matrix via a transmembrane protein complex, the dystrophin associated protein complex (DAPC). Dystrophin binds N-terminally to cytoskeletal F-actin, and C-terminally to the DAPC at beta-dystroglycan. Alpha-dystroglycan binds to laminin in the extracellular matrix, completing the linkage. Dystrophin and the DAPC stabilize the sarcolemma, protecting it from the shearing forces of contraction, and play a role in localizing a number of muscle fiber signaling molecules and channels.

DMD is not readily detectable at birth without a genetic test, but the progression of the disease begins at a young age, with the first symptoms manifesting at 3-5 years of age. Around this age, muscles begin to show signs of weakness, beginning in the hips, legs, and pelvis. Children often exhibit Gower’s sign, a habit whereby they need to successively push off of their knees, thighs, and hips to rise to a standing position due to back weakness. It is very common for patients to develop enlarged calves. Despite their appearance, these limbs are actually much weaker than healthy muscle, with the extra mass coming from fat and connective tissue, hence the term “pseudohypertrophic”. By the age of 12, most DMD patients are wheelchair bound and can no longer move on their own. The disease progresses to even worse stages following this, with cardiac and respiratory muscle problems. Cases usually result in death by the early 20s. These basic symptoms have been known since the disease was first characterized by Duchenne and Meryon in the late 1800s, with an X-linked recessive genetic basis expected by the 1950s and the dystrophin protein identified as the culprit defect in 1987.1,2,3,4,9 But what, exactly, what is the pathway from a dystrophin mutation to these severe symptoms?

DMD is not caused solely by one mutation at a specific site of the massive DMD gene. A variety of mutations can cause the dystrophin loss that leads to DMD. In a French database cataloging over 2,000 DMD patients, it was found that over 60% of observed mutations were large deletions of one or more exons.5 Of the remaining, 26% were small lesion mutations, and 13% were large duplications. Of the small mutations, 39% were nonsense mutations, 32% were insertions or deletions, and 25% were splice site mutations. Tuffery-Giraud et al., who analyzed this database, also identified two mutation hotspots: 74% of deletions were between exons 44 and 45, on the rod domain, while 15% were between exons 2 and 20, an area encompassing the N-terminal actin-binding domain and part of the rod domain.5 What each of these wide ranging mutations has in common is that they disrupt the reading frame and thwart dystrophin expression. 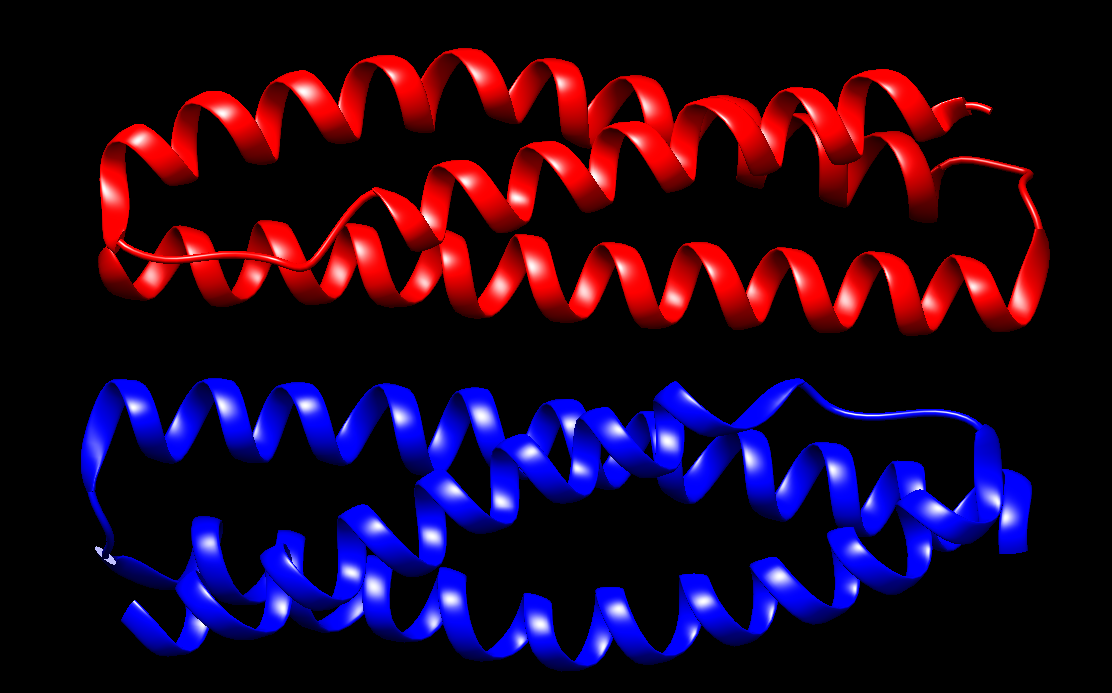 Structure of the spectrin-like domain (described on healthy state page). The rod domain of dystrophin consists of 24 repeats of this motif. 74% of DMD-causing mutations originate on this domain at exons 44 and 45. Structure visualized using UCSF Chimera.

The loss of dystrophin results in the loss of much of the DAPC as well.6 Without the support provided by the anchorage of dystrophin and the DAPC, the sarcolemma becomes destabilized, and this destabilization disrupts its selective permeability. This disruption allows an abnormal influx and outflux of material to which it is usually impermeable, most notably Calcium (II) ions. The definitive pathway leading to the influx of Ca2+ from this destabilization has not yet been elucidated. Some evidence suggests that the membrane is significantly more vulnerable to tearing from the mechanical stress of contraction and relaxation, and thus is prone to rupturing far more often than healthy muscle.7,10 The frequent ruptures of the membrane provide an opening for impermeable material to flow through. A notable example is creatine kinase; elevated serum levels of this enzyme is a telling characteristic of DMD that has been known for decades.8 Other models propose that it is not membrane tears, but increased channel activation that accounts for the increase in membrane permeability. One theory is that the destabilization of the membrane leaves stretch-inactivated ion channels open more frequently, allowing Ca2+ ions to flow in.11 Researchers supporting this model have argued that they found no evidence that dystrophic muscle membranes require more pressure than normal muscle membranes to tear, and thus Ca2+ influx are not a result of general membrane leakage. These stretch channels are opened or closed by suction produced from membrane stretching during contraction.11 Alternatively, some studies have attributed Ca2+ influx to the elevated activity of calcium leak channels, which have been implicated in facilitating the regeneration of intracellular Ca2+ used up during muscle contraction.12,13 In dystrophic muscle, researchers predicted that localized calcium influx from sarcolemma tears creates a positive feedback loop whereby calcium leak channels are activated due to proteolytic activities induced by higher levels of calcium.13

Though a consensus for the exact mechanism has not yet been reached, it has been shown in multiple studies that elevated Ca2+ levels are present in dystrophic muscle and are complicit in disease progression, a hypothesis that predates the discovery of dystrophin.14 The increased influx Ca2+ activates cytoplasmic calpains, a calcium-activated protease family, which overstimulate proteolytic activity and contribute to muscle fiber necrosis.13,15 Calcium overload in mitochondria also generates reactive oxygen species (ROS), triggering oxidative stress within the cell.16 Furthermore, Ca2+ and ROS induce the opening of mitochondrial permeability transition pores (MPTPs), which triggers apoptosis and further contributes to necrosis.17,18 MPTP is a mitochondrial membrane protein whose calcium-induced opening releases apoptotic signaling molecules into the cytosol.

Diagram illustrating part of the pathway of muscle cell death and necrosis, adopted from Burr and Molkentin (Ref 21) . Top right shows entry of calcium ions into the cytosol from membrane tears, and various dysregulated channel proteins, including leak and stretch activated channels. Cell death is induced by activating calpains (CAPN), and the MPTP pathway of the mitochondria.

Chronic inflammation and necrosis of muscle fibers leaves the muscles in near constant need of regeneration. Eventually, muscle repair can no longer keep up with the damage, as muscle satellite cells, or myogenic stem cells serving as precursors to muscle fibers, are exhausted.19,20 The inability of muscles to regenerate results in the fibrosis and adipose infiltration that ultimately culminates in the loss of muscular strength.