Before elaborating on the disease-state of DMD, it is important to understand the proper function of the dystrophin and the muscular system as a whole. Muscles can be categorized into three types: skeletal muscle, smooth muscle, and cardiac muscle. Smooth muscle is an involuntary muscle found in the walls of organs such as the intestines. Cardiac muscle is also involuntary, and functions in contractions of the heart. Skeletal muscle is a voluntary muscle responsible for movement and stability.

Dystrophin is a protein primarily found in skeletal and cardiac muscles. These muscles produce movement and exert force by contracting along their length at the microscopic level. The muscles are structured such that they are made up of multiple thread-like or rope-like structures organized by size. One muscle is made of a collection of connective tissue-enclosed cords called fascicles, which themselves are a bundle of muscle cells. Muscle cells, also referred to as muscle fibers, are abnormally long cells that contain numerous thread-like protein structures called myofibrils. Myofibrils consist of repeating units of structure called sarcomeres, and are made up primarily of filament proteins, actin and myosin. It is at the sarcomeres where contraction of the muscle occurs at the most basic level. According to the Sliding Filament Theory, the thin filament actin and thick filament myosin are responsible for this. The action potential from a neuron activates a signal transduction pathway in which calcium ions are released from the sarcoplasmic reticulum, a membrane bound muscle cell organelle. The calcium ions bind to another myofibril protein called troponin, causing them to change configuration and move an additional protein, tropomyosin, away from its resting position, exposing binding domains on actin that had been covered by the tropomyosin. Myosin protein heads bind to these exposed binding sites, pulling actin along its length to contract the sarcomere. This process across all the sarcomeres in a muscle is the driving force behind muscle movement. 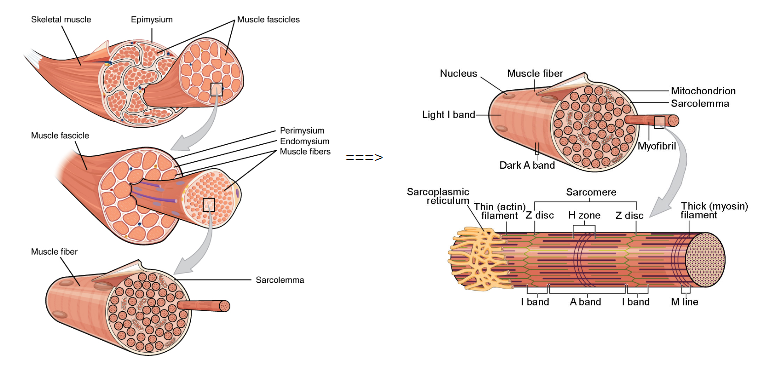 Diagram of striated muscle structure, adopted from wikimedia. The sarcomere is centered at the M-line, where myosin filaments stem and bordered on either side by the Z-lines, where actin stems. During contraction, these filaments slide past each other, actin towards the M-line, and myosin towards the Z-line. The I-band and H-zone disappear and the A-band shortens, leading to contraction of the sarcomere.

The normal function of the dystrophin protein, coded for by the DMD gene, is to link the cytoskeleton of muscle cells to the extracellular matrix in order to anchor the sarcolemma, the muscle fiber’s cell membrane, via binding to a transmembrane protein complex. Specifically, dystrophin binds to the F-actin of the cytoskeleton, and a collection of proteins and glycoproteins called the dystrophin associated protein complex (DAPC), which in turn is connected to the extracellular basement membrane.1 This anchoring ultimately provides the support necessary for the sarcolemma to withstand the mechanical stresses of muscle contraction without tearing.2 Additionally, this complex is interconnected to a number of signaling molecules important in muscle regulation, and rely on dystrophin and the DAPC for proper localization.

Dystrophin is an extremely large rod shaped protein, at 3685 amino acids and 79 exons, encoded by the DMD/dystrophin gene located on the X chromosome at the Xp21 position.3 Hoffman et al. characterized this protein in 1987, uncovering for the first time the protein product of the gene responsible for DMD. It is an intracellular protein that consists of four major domains.4 On the N-terminal end is the actin binding domain (ABD), where the protein is docked to the cytoskeleton.5 The crystal structure of the actin binding domain was reported by Norwood et al. in 2000. The final model shows four ABDs assembled into two antiparallel dimers, with each domain consisting of two sub domains, clusters of alpha helices called calponin homology (CH) domains, CH1 and CH2.5 This domain comprises exons 2-8 encompassing residues 14 through 246.4,5 The central rod domain is the largest region of the protein, consisting repeating 24 repeating triple helical spectrin-like domains.7 This comprises exons 8-61 and encompassing amino acids 253 to 3040.6 Finally, the C-terminal end consists of a cysteine-rich domain and a C-terminal domain encompassing exons 62-69 (amino acids 3080 to 3060) and exons 69-79 (amino acids 3361-3685) respectively. Huang et al. reported the crystal structure of a region of the cysteine rich domain that interacts with the DAPC protein beta-dystroglycan. This fragment contains a WW domain and two EF hand-like domains as well as a number of additional alpha helical bridges.6 The binding site of this fragment comprises the beta sheets of the WW domain, as well as a section of the first EF domain. This interaction consists of six H-bonds between both proteins, with another six through H2O bridges. This interaction tightly binds dystrophin and the DAPC. 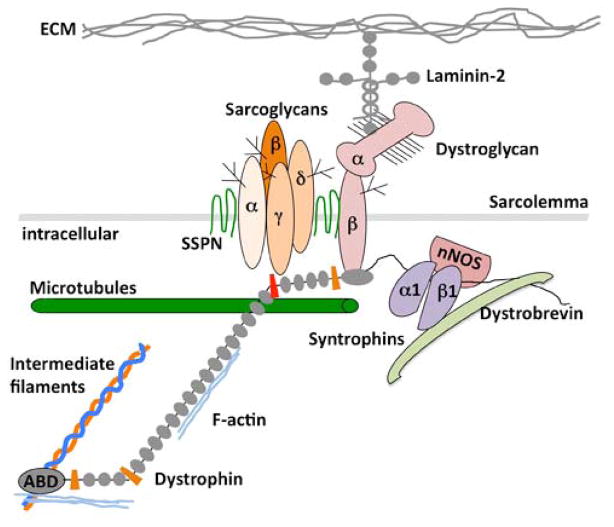 Diagram of the DAPC, taken from 2015 review by Gao and McNally. Dystrophin shown in grey.